You can’t mention classic cocktails without bringing up the Tom Collins. The Tom Collins is a bright and refreshing drink that’s perfect for the summer.

What is a Tom Collins?

The Tom Collins cocktail is composed of gin, lemon juice, sugar, and soda water. This “gin and sparkling lemonade” drink, was first written in 1876 by Jerry Thomas, a pioneer in American mixology. It is traditionally served in a Collins glass or highball glass over ice.

The International Bartenders Association no longer publishes an official recipe. A Tom Collins is often made in a shaker with a quarter of lemon juice, three-quarters of Old Tom Gin, and half a tablespoon of sugar. The resulting liquid is used to fill half of a tall tumbler. The drink is finished with soda and ice, then garnished with a slice of lemon, orange, and cherry.

​​History of the Tom Collins cocktail

The origins of Tom Collins are unknown. This inability to provide a definitive origin sparked a debate between Britain and the United States, with both sides claiming the drink.

H.L Mencken stated in the 1920s that the cocktail was unmistakably American since the English had no inventiveness when it comes to naming things. As a result, if a recipe calls for whiskey and soda, it is referred to as a whiskey-and-soda. So, no English person would have named a cocktail “Tom Collins.”

According to some, the Tom Collins was inspired by a joke told in New York in 1874. A group of buddies started telling people at local pubs that a man named Tom Collins was wandering around town spreading lies about them.

As a result, many people began to go from bar to bar in search of the slanderer. The joke had been repeated before, but it had reached epic proportions that year. As a result, bartenders were inspired to create the Tom Collins cocktail to offer to those who entered the room in search of the elusive figure.

What Glass is a Tom Collins Served In?

The Tom Collins is typically served in a collins glass. A collins glass is a narrow, cylindrical glass tumbler perfect for iced drinks. If you do not have a collins glass handy, you can also use a regular highball glass. Don’t worry, you will be forgiven. If you don’t own the right glassware for this cocktail, consider some of the options below. 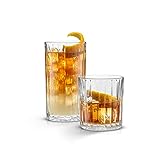 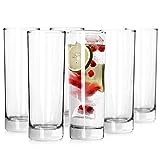 How to Make a Tom Collins

Below are the ingredients and directions for a Tom Collins. We hope you love this drink as much as we do.

So what do you think of the Tom Collins? Love it? Hate it? What would you rate it? Let us know in the comments below.